This report has been finished for quite some time, but we've finally got it posted on the GCFSI website: Small- to Medium-Scale Urban Legume Exchange in Lilongwe.  It reports on research conducted over the summer of 2014 in association with researchers at Lilongwe University of Agriculture and Natural Resources (LUANAR). The following is lifted from the Executive Summary.

Through a coordinated series of intensive studies, several teams of researchers sought to shed light on the question, “Where and how can multipurpose legumes be scaled for sustainable intensification of maize systems and what would the potential impacts be, in the medium term, across the food system in Malawi?” The integration of multipurpose legumes into maize-based farming systems is a well-known and well-regarded agronomic innovation that can improve soil fertility, raise maize yields, and diversify and improve household nutrition and livelihoods. To date, most multipurpose legume research has taken place in relation farmer adoption and the on-farm production environment. In contrast, this GCFSI research project recognizes that farming systems go well beyond the farm gate, and that innovation in off-farm food system policy and practice can have a profound impact on farmer decision-making.

This particular study is qualitative and is meant to understand better the constraints and opportunities in the legume sector as small- to medium-scaled entrepreneurs describe them. Findings are largely based on response rankings. Due to the conventional wisdom that pigeon pea is a legume of the south and not widely available in Lilongwe, it was surprising to find that most respondents carried it. Given demographic patterns that show population movements from south to north, it is expected that the demand for pigeon pea will grow as more southerners settle in the central region. To enhance the ability to accommodate demand, innovations should target the well-defined problems people face in storage and transportation infrastructure, and should improve their ability to invest in their businesses. Where possible, solutions should aim to leverage existing infrastructure and organizational forms. Importantly, the identification, creation and scaling of innovation in urban areas should occur through collaborative mechanisms and involve municipal officials.

In a deliberate effort to maintain and intensify interdisciplinary efforts, the report identifies a number of synergies with other GCFSI research. Recognizing that urban food provisioning and exchange occurs within a social, economic, and environmental context, future urban food research should always consider how farmers are affected, present and future ecological uncertainty, and gender/other sociocultural factors.

Lastly, the report identifies several next steps, which include building mixed methods research capacity, continuing to address local research needs, and addressing specific intervention areas, in part through a targeted RFA process. Those intervention areas include storage, access to capital for those working in urban food-based livelihoods, and organizational models that concern food transportation. 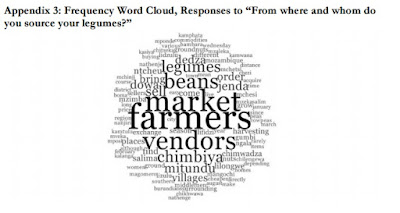 Posted by Stephanie at 1:14 PM No comments:

Over the last six months or so, we've seen some passionate and widespread rejections of the status quo, most notably, the rise of Donald Trump and the success of the Brexit campaign. Most media explanations blame racism, ignorance, and stupidity in large segments of the population for those occurrences. For the most part, I think those explanations miss the forest for the trees. Rather, I think that there's much more insight to be gained by taking a look at how contemporary economic theory and the practices generated by it have systematically marginalized large numbers of people. Articles such as this one, this one, and this one*** discuss the fear and hopelessness felt by those who sense they've become economically and socially irrelevant, and are probably closer to the mark. When one feels irrelevant, they raise their voices until they can seem 'extremist' by those who hold the keys to the kingdom.  The remedy, then, would be to find ways to make them relevant again, and to begin making policies as if people mattered. Current policy trajectories, which continue to privilege capital over labor, aren't going to do it, and, in fact, will only create more discord, disenchantment, and disenfranchisement.

The reason I preface this food-related blog post with that commentary is because I am urging those engaged in agrifood development to look at how current global trajectories towards obesity, food price volatility, and unhealthy food environments are, like social and economic disenfranchisement, the result of policy that privileges capital over human well-being.  Another way of saying it is that there is a need to understand what goes on in global and local food environments as an outcome, or an expression of, the encroachment of neoliberal economic policies.* Like those economic practices and policies that are responsible for increasing inequality, how are the economic policies that promote comparative advantage, consolidation of capital, and concentration of power in the food system determining the quality of the food environment?

Honestly and rigorously investigating that question means understanding that trajectories, of whatever kind, are not universal, linear, and pre-destined. It means understanding that values and choice underlie systems and inform the practices and relationships that animate that system. It also means more closely linking food practice and policy with material realities, including climate change. Unfortunately, much of the research that currently informs food system investments and policy prescriptions treats agrifood development as if it's a one-size-fits-all neoliberal endeavor. The fundamental relationships that comprise a 'modernized' food system go unquestioned, and policy instead focuses on the tweaks that need to be made to enact those same relationships.  In other words, copy-paste policies to enact copy-paste food systems.  The assumptions underlying that thinking means that things like obesity are assumed to be an inevitable outcome of modern food system and will have to be addressed retrospectively.**

Pierre Bourdieu characterized neoliberalism as a scourge and a myth.  A myth, he says, that draws on the promise of a "Utopia of Unlimited Exploitation. (pdf)" Applied to food systems, assumptions of unlimited exploitation lead to production practices that seek to transcend biological limits, to processing practices that 'value add' by stuffing as much subsidized commodity crops into food as possible, to distribution practices that are driven by narrow conceptualizations of 'efficiency,' and to eating practices that are are disconnected from place, shaped more by corporate values than local history. In this kind of unlimited and exploitative food system, the goal is for supply and demand to be boundless, seasons meaningless, and calories endless. In turn, the means for achieving that kind of food system, like in other part of the economy, rely on capital accumulation, economies of scale, and almost limitless exploitation of labor and natural resources.

New realities require new abstractions.  Resiliency theory is one; there are undoubtedly others. One thing that I feel pretty confident saying, though, is that the economic relationships that are collectively referred to as 'neoliberalism' are outdated and should go the way of the dinosaur.


*I should define neoliberal here.  This is a term that is not usually used by the economists or policy-makers that prescribe neoliberal policies, and is instead used more commonly in critiques of contemporary economic policy. The promise of neoliberal economics is that the market is the force that will cause all boats to rise. Some of the key features of neoliberal policies are deregulation, public sector austerity, privatization, and free trade. These things, in combination, are perceived to enable the development of markets that best serve the public interest. There are countless critiques of this philosophy, and what's become clear in recent years is that market-led development, with the coincident privileging of capital, has been a recipe for environmental devastation and increasing inequality.

**Julie Guthman's "Weighing In: Obesity, Food Justice, and the Limits of Capitalism" is an important critique of neoliberal food environments.