For awhile now, I've been hearing people, mainly libertarian types, warn against the evils of social engineering.  As far as I can tell, I think what they are mainly protesting are the imposition of social policies designed to get people to change behavior.  One big area that causes hackles to rise is urban planning. For example, implementing policies and practices that try to get people out of their cars and into public transportation and/or onto bikes is deemed 'social engineering' and is rejected for its attempt to infringe on freedom.  This article responds to that libertarian position in a way that I'd agree with.  To judge such an urban policy without contextualizing it historically is disingenuous because getting people into their cars in the first place required quite a bit of 'social engineering.'

I have written before how Utopian visions are dangerous and repressive (per David Harvey).  As it applies to the work I'm doing with urban agriculture in Africa, it's a real problem.  Certain ideas of 'what's urban,' which generally are reflective of a modernist, capitalist imaginary, mean that anything that doesn't accord with that vision, like urban agriculture, are deemed out of place, and therefore inappropriate, in an urban environment.  What must be recognized, however, is that there are multiple ways of being urban, and that cities can develop in highly varied ways and can look very different from each other.  Highly varied systems, which should be formulated and implemented via a process of (democratic?) urban planning, can be developed to facilitate situated notions of well-being.

But, I think what's important to understand is that people aren't just born with preferences.  They learn them, and they learn them by doing them; they learn them by living in their environments.  Then they get accustomed to them and don't want to change because change is difficult and they might lose something to which they've become accustomed.  But, what if the systems we created, which were originally based on an ideological vision of what would be better, turn out to have been a mistake?  What if our behaviors are killing us?  Does it not make sense that we should change our behaviors, which then can help us to change our preferences?  This is a fine line for me to walk because I really have become averse to government intervention into my life.  But, I also don't think that development should be left to market forces...because, there again, is a certain ideology in action.  Market forces are NOT the invisible hand (of god).  Certain forces predominate as a function of power, and power is enacted by people doing things and implementing systems that help them do those things.

Anyways, the picture that inspired this post is this one: 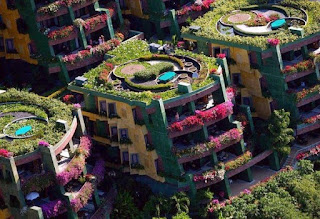 which I got from this blog: http://exopermaculture.com/2012/02/02/love-pray-eat-in-place-check-out-this-apartment-complex/.  We need to make our cities more sustainable, and some social engineering is going to be required. But, it's not the boogeyman/strawman that libertarians make it out to be. We engineer and create our environments and our futures. We always have. And things shouldn't stay the same.  In fact, they can't stay the same.  I think one critical thing we need to pay attention to, however, is where the power resides, and who is making decisions on behalf of whom.  And, if we re-distribute power more democratically, a commensurate shift in responsibility will also be required.